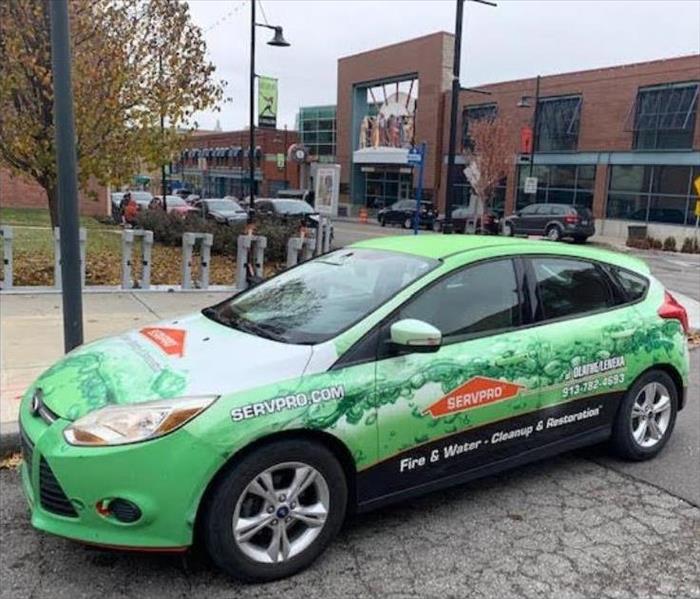 Large or small fire, team SERVPRO is standing by for your emergency fire damage call. Call 24/7 - 365 days a year.

Although incorporated in 1857, it took another twenty years before the township received a designation as a second-class city when it had just over two thousand residents and erected numerous buildings, including a school for the deaf, churches, and a subscription library. Of the residents, nearly three-quarters worked in agriculture, and the rest in transportation and mining. Hardships such as drought, tornadoes, and plagues of grasshoppers hit the agricultural section hard and caused crops to fail, causing many of the settlers to leave the area. The Civil War further compounded this, and Olathe saw itself invaded by the guerilla general William Quantrill, resulting in many structures getting destroyed.

After the war ended, the governor of Kansas, John P. St. John, made his home in Olathe and built up the township to exceed its former size and amenities by establishing a cooperative for the farmers in the area and founded a store. The return of industry to the township heralded a return to prosperity for the residents with the opening of companies such as:

With the establishment of the various industries, Olathe had a rapid turn for the latest technology available such as steam heating for buildings, electric rather than gas lights, public utilities to regulate water, gas, and telephones became commonplace for residents.

During the time frame from 1910 until 1930, Olathe underwent significant changes and an increase in population to its largest to date. A waterworks plant that covered 20-acres provided enough clean water for the community, and the town voted affirmatively to build a city hall. World War I brought the Hyer Boot Factory to the town's forefront as an employer as the need for boots for the soldiers increased.

The Bricklayer of Olathe

One man that made the news in 1925 was James Garfield Brown, known by his local nickname, "Indian Jim." He participated in the Kansas City Road bricklaying competition against the champ Frank Hoffman. He won by laying 218 tons of brick, a total of just over 46,000 bricks in seven hours and forty-eight minutes. He won $200 along with his regular wages of two-dollars per hour.

Can Sheetrock With Water and Fire Damage in Olathe Properties Get Restored?

SERVPRO technicians have vast experience dealing with all types of fire damage cleanup in Olathe homes. Often, destruction from the fire often includes issues created by the water used to extinguish a fire. One of the most critical factors for the techs is determining which building materials have restoration potential through cleaning and drying.

When sheetrock comes into contact with water, it can wick the water quickly, and the moisture gets pulled upward through the core, and the wall or ceiling will have telltale signs of water damage such as:

SERVPRO of Olathe / Lenexa and SERVPRO of Blue Valley at (913) 782-4693 serves the local Olathe community for any size fire damage restoration services needed.